I’m having a bit of a head scratcher on my end and not sure where to start. I’ve got a Pixhawk mini running PX4, setup with qGroundControl. I’m trying to get my done to HOLD in place but whenever I switch to that flight mode the drone lands instead. I’ve got two logs here, both with the same setup on the channels/flight modes, but interestingly enough on the first one after “landing” the logs show that it loiters for a brief moment.

When I hook the drone up to QGroundControl I get a fair number of warnings about the GPS signal being noisy. Even when the LED on the pixhawk is green.

Does anyone have any thoughts or directions that I might look in to help resolve this?

When you switch to Loiter on the Ground does QGC reflect that?

I would gues the Flight Mode Thresholds do not match your RC Setup.

By the way did you mean to have Kill and Acro on Ch8?

Occasionally it will switch into Loiter/Hold, but most of the time it switches to Land. And when it does switch to land the Pixhawk Mini starts flashing PURPLE and beeping. Which means that it doesn’t have GPS lock. This is interesting though because in all other modes Stabilize/Altitude it pulses GREEN, which indicates that it does have GPS lock.

I’m currently using the single channel flight mode. I’ll attach a photo. They correctly are highlighted when I switch channel 5 between the three.

As for Kill/Acro on Ch 8, most certainly not, I only wanted to have my kill switch on Ch 8, which I thought was indicated in the screenshot. I’ll have to look into that.

How did you see that Ch 8 was Kill/Acro? 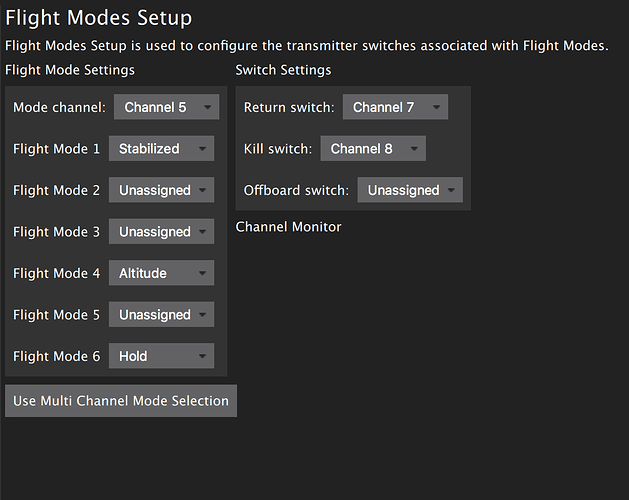 I feel like I’ve slightly narrowed it down. I believe that there is some issue with the GPS lock from the perspective of the Pixhawk. My 3DR GPS module gives me 1 solid green and 1 flashing blue light, indicating that it does in fact have a lock. Also in QGroundControl I have usually 12-15 satellites, and a VDOP of ~1.2.

But still when I switch into HOLD mode I get the purple flashing light on the Pixhawk and loud beeping. The drone is also put into LAND mode when this happens.